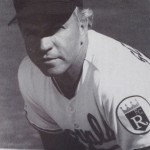 As of 2016, Bob Schaefer has spent 36 years in professional baseball, including eleven as a coach, manager or special assistant to the GM in the Royals organization. A two-time interim manager in Kansas City, Schaefer was the skipper of the Royals for 18 games (1991 and 2005) as well as a first base or bench coach for eight KC summers. Besides his time with the Royals, Schaefer was well known as Joe Torre’s “right hand man” with the Dodgers (2008-2010) and currently serves as a Special Assistant to the GM for the Washington Nationals. Schaefer recently joined Dave O to talk about his entire life in baseball, from playing in the 1965 College World series with UConn to spending three seasons as a player in the Cardinals organization, to his times in KC and LA plus much, much more. Truly a great baseball man with priceless stories! (Photo Courtesy Kansas City Royals) 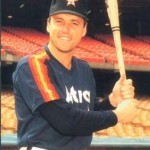 Terry Puhl played for the Royals during the 1991 season as he capped off 15 years at the Big League level, including the first 14 in Houston (1977-1990). An All-Star in 1978, the left handed hitting Puhl retired with lifetime MLB marks of .280/.349/.388 and as the (then) all-time leader in outfield fielding percentage (.993). A member of the Canadian Baseball Hall of Fame and the current Head Baseball Coach at the University of Houston-Victoria, Terry recently joined Dave O to talk about being signed by Houston at 17, playing rookie ball then returning to high school football!, 14 terrific years with Houston, wrapping up with the Royals and lots more! (Photo Courtesy Houston Astros) 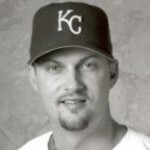 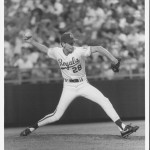 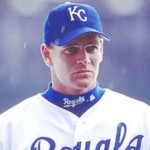 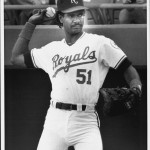 Luis de los Santos played first base for the Royals from 1988-1989, amassing marks of .280/.294/.573 in 39 games. A 2nd round selection of the Royals in the 1984 draft, de los Santos was a prolific hitter at the minor league level, earning the 1988 MVP of the American Association for the Omaha Royals while regularly appearing on Top 10 Royals Prospects lists from Baseball America in 1985-1989. Besides his times with the KC organization, de los Santos went on to appear at the Big League level with Detroit in 1991 and later, broke several hitting records in various countries (including Mexico and Korea). Luis recently joined Dave O from his home in the Dominican Republic to talk extensively about life and culture in the DR, coming up through the Royals organization, what it was like playing with Bo Jackson in his first year at Memphis (1986) and TONS of great memories he had with the Royals organization. *** NOTE *** Occasionally (every few minutes) audio is slightly muffled for a few seconds at a time because of the overseas call – but stick with it, it always comes back. *** (Photo Courtesy Kansas City Royals)

Dane Iorg played for the Royals from 1984-1985 and is best remembered for delivering the game winning pinch hit in Game 6 of the 1985 World Series. A left handed utility man and the brother of former MLB’er Garth Iorg, Dane was originally a 1st round selection by the Phillies (1971) out of BYU and played parts of 10 seasons at the Big League level for Philadelphia, St. Louis (where he hit .529 in the winning 1982 World Series), Kansas City and San Diego. He recently joined Dave O to tell incredibly funny and passionate baseball stories, from “less than ideal” minor league facilities to his admiration for Whitey Herzog in St. Louis, to a funny story about Garth’s wife during the 1985 ALCS and of course, many, many questions about Game 6 of the World Series. Truly a must listen for any Royals fan. (Photo Courtesy Kansas City Royals) 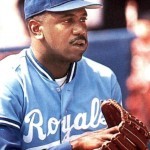 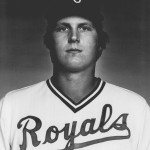 Mike Jones pitched for the Royals from 1980-1981 & 1984-1985, appearing in a combined 71 games with 25 starts. A 6-6 southpaw, Jones was Kansas City’s first round selection in 1977 (21st pick overall) and spent his entire Big League career as a Royal. Jones recently joined Dave O to reminisce about the entire journey, from being a small town high school kid in New York to pitching the Royals minor leagues, to the tragic car accident that nearly ended his career (and life) in 1981 to being a World Champion in 1985. A highly informative and entertaining trip down memory lane. (Photo Courtesy Kansas City Royals) 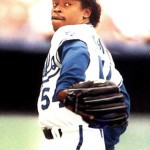 Luis Encarnacion pitched for Kansas City during the 1990 season, appearing in four games out of the Royals bullpen. Selected by KC from Cleveland in the 1987 Rule 5 Draft, the 5-10 right hander from the Dominican Republic spent a total of four seasons in the Royals organization with 345.1 MILB IP and an ERA of 2.84. Encarnacion recently joined Dave O to talk about what it was like growing up in Santo Domingo, the challenge yet hilarity of learning American foods, how much of a dream it was to pitch in the Big Leagues and much more! (Photo Courtesy Kansas City Royals)