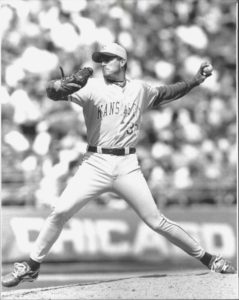 Chris Haney pitched in the Royals starting rotation from 1992-1998, winning 33 games for Kansas City in 99 starts. Originally selected by the Expos in the 2nd round of the 1990 draft, the 6-4 lefty came to the Royals via a trade with Montreal in August of 1992 (KC received Haney and Bill Sampen; Montreal received Sean Berry and Archie Corbin). Chris comes from great genes, as he is the son of former Big League catcher Larry Haney, who spent 12 years at the MLB level from 1966-1978. Haney recently joined Dave O to talk about the role his Father played in his baseball development, Trivial Pursuit, giving up Wade Boggs’ 3,000 hit, his favorite memories of KC and much, much more! (Photo Courtesy Kansas City Royals)