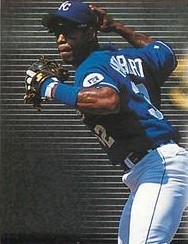 Ray Holbert was a utility infielder for the Royals during the 1999 & 2000 seasons, appearing in 37 games. In addition to his times with Kansas City, Holbert also appeared at the Big League level with San Diego, Atlanta and Montreal, spending parts of five seasons in MLB. Ray recently joined Dave O to talk about having a brother (Aaron) who also played in the majors, the long grind of moving through the minor leagues, playing with Tony Gwynn, great memories of Kansas City and lots more! (Photo Courtesy Kansas City Royals)