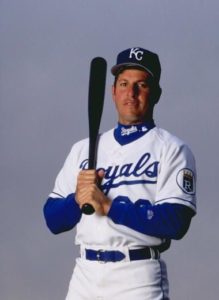 Rico Rossy spent three years with the Royals organization (1992-1994) including the 1992 and 1993 seasons in KC. Acquired from the Atlanta Braves for outfielder Bobby Moore (12/91), Rossy was primarily known for his glove and having a better bat than most utility infielders. Rico also spent time at the major league level with Atlanta (1991) and Seattle (1998). The Puerto Rico native and former Purdue Boilermaker recently joined Dave O to talk about how he got the nickname “Rico,” rooming with Randy Johnson in Alaska during college summer ball, going on the DL in KC with Chicken pox, the picturesque boutique hotel he now owns near Puerto Rico (https://villaboheme.com/) and lots more! (Photo Courtesy Kansas City Royals) Download file    Download on iTunes