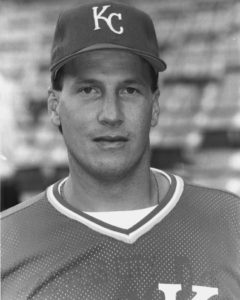 Matt Winters played for the Royals during the 1989 season, appearing in 42 games (31 of which came while spelling Danny Tartabull in RF). Originally a first round selection of the Yankees in 1978, it took Winters eleven minor league seasons to get to the Big Leagues. Following his times with the Royals, Matt went on to star in Japan, where he crushed at least 30 HR’s a season from 1990-1993 for the Nippon Ham Fighters. The 6-3 lefty and current Ham Fighter scout recently joined Dave O for a VERY colorful chat about playing with Rex Hudler in Rookie Ball, batting behind Don Mattingly in multiple minor league seasons, playing in Japan and of course, loads of terrific stories about his days with the Royals organization! (Photo Courtesy Kansas City Royals)