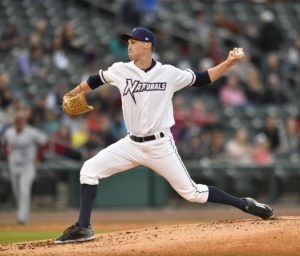 Matt Strahm continues to knock on the proverbial “Kansas City door,” as the 6-3 lefty currently sports a 3.17 ERA, 1.17 WHIP and 87 K’s in 88 IP at AA Northwest Arkansas. Added to the Royals 40 man roster last winter, the Fargo, North Dakota native began 2016 as the 8th ranked prospect in the Royals organization according to Baseball America. He joined Dave O on Friday, July 8th from Midland, Texas to talk about the excitement of being added to the 40 man roster, the ongoing work on perfecting the changeup, an update on whether or not the 90’s movie Fargo has been viewed yet and lots more! (Photo Courtesy Alan Jamison/NWA Naturals)