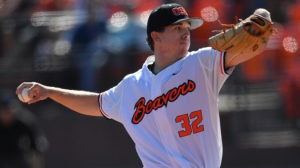 Travis Eckert was selected by the Royals in the 7th round (223rd overall) of Friday’s 2016 MLB June Amateur Draft. A 6-2 right handed pitcher, Eckert comes to the Royals via Oregon State, where he was the Beavers #1 starter during his senior campaign (6-4, 3.28 ERA). Travis was also drafted in 2015 by the San Francisco Giants (20th round) but elected to return for his senior season at Oregon State. He recently joined Dave O to talk about being drafted twice, why he returned to school, his surprise and excitement in the Royals being the team that selected him and lots more! (Photo Courtesy Oregon State University)